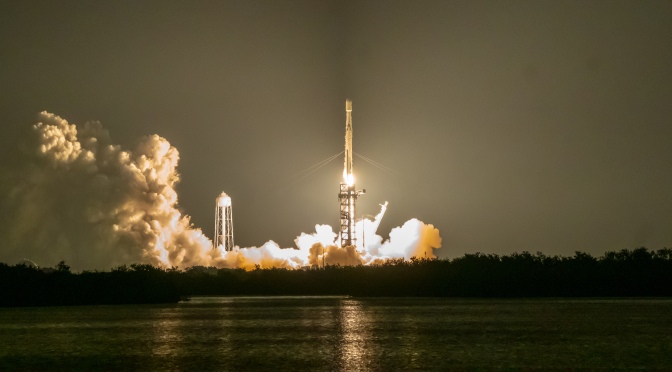 Time and again during launch campaigns, the media representatives for SpaceX remind the public that “Space Is Hard.”   There is no question that spaceflight is immensely complex and full of risks.  That said, SpaceX continues to make spaceflight to Earth orbit seem easier and easier.    The most recent example was this past Tuesday, June 25, at 2:30am when the Falcon Heavy (FH) leapt off Pad 39A and executed what can be described fairly as one of the most complex satellite delivery missions ever:  Space Test Program 2.

For space enthusiasts viewing the launch at KSC or elsewhere down on the Cape, the launch was pure spectacle of the very best kind.   More than 2,500 visitors flocked to the Saturn V Center on Banana Creek with hopes of watching the FH head to orbit (and return) in the middle of the night from the closest vantage point for the general public.   They persisted through a 3-hour wait in the launch window, despite oppressive humidity.    SpaceX and the KSC Visitor Center made the wait all the more worthwhile by providing tunes, pre-launch commentary and catered food.   These FH gatherings provide an important public service, putting children and adults in close contact with what is currently the most audacious and creative spaceflight engineering on the planet.   These are also great and important opportunities for people from around the country (and the globe) with a wide range of perspectives to find and celebrate common ground — a staunch belief in and appreciation of the value of space science and engineering in what is otherwise a fractured political landscape.

At 2:30am, T-minus zero, the 27 Merlin engines on the core and twin boosters fired up and SpaceX once again demonstrated how ingenuity and determination can yield remarkable results including:

Simply put, the night launch of the FH was beautiful.

Once the FH cleared the pad and headed East, the sky was marked by a stunning, fast-moving, tear-drop of red-orange flame.  After a few seconds, the sounds of launch reached the Saturn V Center and viewers were treated to the truly eerie vibrations created by 27 Merlin engines as they throttle up to full thrust.  The sound is akin to dozens of tightly-coiled springs twanging at high-frequency with a deep base vibe underscoring it.   As the FH pushed downrange, from the ground it seems that the vehicle had turned into a meteorite streaking across the sky, looking as if it might be diving down toward the horizon.   During the immediate climb-out, it was possible to see the condensation cloud that washes over the vehicle as it crosses Max Q.  The sky was clear enough that folks on the ground could see with the naked eye:

No one was disappointed.  I suspect the United States Air Force, the prime sponsor of this mission, was equally satisfied with the outcome for it now has another, economical and reliable flight-proven option for getting various payloads to orbit.

Space is hard but it appears to be getting easier.